Differentiation between Celiac Disease, Nonceliac Gluten Sensitivity, and Their Overlapping with Crohn’s Disease: A Case Series

Celiac disease (CD) and nonceliac gluten sensitivity (NCGS) are two distinct conditions triggered by the ingestion of gliadin. Although symptoms of nonceliac gluten sensitivity may resemble those of celiac disease, due to the lack of objective diagnostic tests, NCGS is associated with overlapping symptomatologies of autoimmunities and Crohn’s disease. Furthermore, a gluten-free diet is only recommended for those who meet the criteria for a diagnosis of CD. Unfortunately, that leaves many nonceliac gluten-sensitive people suffering unnecessarily from very serious symptoms that put them at risk for complications of autoimmune disorders that might be resolved with a gluten-free diet. Thus, a new paradigm is needed for aid in diagnosing and distinguishing among various gut-related diseases, including CD, NCGS (also known as silent celiac disease), and gut-related autoimmunities. Herein, we report three different cases: the first, an elderly patient with celiac disease which was diagnosed based on signs and symptoms of malabsorption and by a proper lab test; second, a case of NCGS which was initially misdiagnosed as lupus but was detected as NCGS by a proper lab test with its associated autoimmunities, including gluten ataxia and neuromyelitis optica; third, a patient with NCGS overlapping with Crohn’s disease. The symptomatologies of all three patients improved significantly after 12 months of gluten-free diet plus other modalities. 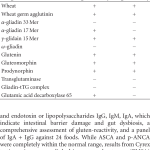 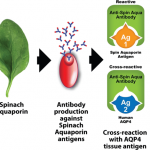 The Immunology of Immediate and Delayed Hypersensitivity Reaction to Gluten