In spite of numerous research efforts, the exact etiology of autoimmune diseases remains largely unknown. Genetics and environmental factors, including xenobiotics, are believed to be involved in the induction of autoimmune disease. Some environmental chemicals, acting as haptens, can bind to a high-molecular-weight carrier protein such as human serum albumin (HSA), causing the immune system to misidentify self-tissue as an invader and launch an immune response against it, leading to autoimmunity. This study aimed to examine the percentage of blood samples from healthy donors in which chemical agents mounted immune challenges and produced antibodies against HSA-bound chemicals. The levels of specific antibodies against 12 different chemicals bound to HSA were measured by ELISA in serum from 400 blood donors. We found that 10% (IgG) and 17% (IgM) of tested individuals showed significant antibody elevation against aflatoxin-HSA adduct. The percentage of elevation against the other 11 chemicals ranged from 8% to 22% (IgG) and 13% to 18% (IgM). Performance of serial dilution and inhibition of the chemical–antibody reaction by specific antigens but not by non-specific antigens were indicative of the specificity of these antibodies. Although we lack information about chemical exposure in the tested individuals, detection of antibodies against various protein adducts may indicate chronic exposure to these chemical haptens in about 20% of the tested individuals. Currently the pathological significance of these antibodies in human blood is still unclear, and this protein adduct formation could be one of the mechanisms by which environmental chemicals induce autoimmune reactivity in a significant percentage of the population.

Antibodies as predictors of autoimmune diseases and cancer 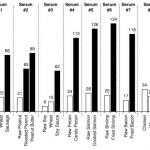