Silicone, previously thought to be a biologically inert and harmless material, has now been reported to elicit antibody response and to be responsible for adjuvant disease in humans. The present study was designed to evaluate the immune function of forty individuals who had undergone silicone breast augmentation for a period of longer than ten years and who were compared with 40 sex and age-matched controls. The following immunological functions were studied: lymphocyte subset analysis, lymphocyte mitogenic response, NK cytotoxic activity and markers for autoimmunity such as ANA, rheumatoid factor immune complexes such as smooth muscle, myelin, and thyroid, and tissue antibodies. Results of lymphocyte subpopulation analysis showed significantly elevated T helper/suppressor ratio in 60% and significantly decreased T helper/suppressor ratio in 7.5% of the silicone implant group, while the control group showed increased helper/suppressor ratio only in 10% of tested individuals and no significant decrease in the T helper/suppressor ratio. There was 20% inhibition in T cell mitogenic responses in the silicone implant group, which is significant when compared to the controls.

When NK cytotoxic activity was compared between the two groups, significant inhibition in the ability of lymphocytes to kill tumor target cells was observed in the silicone implant group. This inability of target cell lysis was attributed to the demonstrated lack of granularity of NK cells from the silicone implant group. There was significant increase in: immune complexes, anti-nuclear antibodies, anti-thyroid antibodies, anti-striated muscle cell antibody, and anti-myelin basic protein antibodies. These immunological abnormalities in individuals who underwent silicone breast augmentation indicate a mechanism of tissue injury to these patients, causing autoimmune diseases or syndromes. Since autoimmunity in some other conditions is associated with abnormalities in the HLA serotyping system, and since some collagen vascular diseases have been associated with a higher incidence of the HLA serotyping system, it is recommended that HLA studies be included in future investigations of immune-mediated abnormalities associated with silicone breast augmentation.

Our findings here show definite abnormalities of the T helper/suppressor ratio, increased autoimmunity, as well as increased production of immune complexes. Silicone implants have been used in cosmetic and reconstructive surgery more than 30 years (Brown et al., 1960). The gel used in the implant is produced from silicone, which is then related with methyl chloride and polymerized to form stable polydimethylsiloxane (Brown, et al., 1960). There have been a number of reports describing the occurrence of connective tissue disease in patients after the implantation of silicone.(ABSTRACT TRUNCATED AT 400 WORDS)

Fluctuation of zonulin levels in blood vs stability of antibodies

Detection of Islet Cell Immune Reactivity with Low Glycemic Index Foods: Is This a Concern for Type 1 Diabetes? 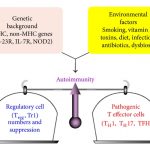