Recently, a breakdown of paracellular and vascular pathways and activated neuroimmune and oxidative pathways were established in (deficit) schizophrenia. The aim of the current study was to delineate a) the differences in these pathways between stable phase, first (FES) and multiple (MES) episode schizophrenia, and b) the pathways that determine the behavioral-cognitive-physical-psychosocial (BCPS)-worsening in FES/MES.

Immune System Under Fire: The Rise of Food Immune Reaction and Autoimmunity

Fluctuation of zonulin levels in blood vs stability of antibodies 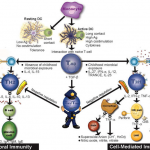