Natural Killer (NK) cells have been characterized from several viewpoints. However, we still know very little about the nature of phagocytosis by these cells. In this report, we demonstrated that murine NK cells are indeed phagocytic cells using Candida albicans (CA) as test organism. NK cells were isolated by percoll discontinuous gradients technique and their percentage was appoximately 90% as the cells were identified morphologically in cytospin preparation and by asialo GM1 surface marker using flow cytometry, while the percentage of macrophage in the LGL preparation was 1-2%. Phagocytosis by NK cells is an active process which has been demonstrated at 5-10 min after culture of NK cells with CA.

The phagocytic activity was maximized (65%) at 1-2 hr and started to decline (53%) at 4 hr. The studies also revealed an interesting relationship between phagocytosis by NK cells and the antitumor activity by these effector cells. NK cells that were cultured with CA exhibited a significant decrease in their cytotoxic reactivity against YAC-1 targets. The mechanism by which phagocytosis suppresses NK activity is not yet known, but could be attributed to a defect in NK lytic stage since effector cell binding capacity to their tumor targets was not altered. We conclude that: 1) phagocytosis of CA may provide a new evidence of origin of NK cells as phagocytic cell precursors, and 2) phagocytosis induced suppression in NK activity via interference with the cytolytic pathway of effector cells. 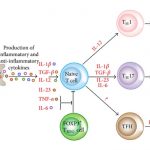 A Potential Link between Environmental Triggers and Autoimmunity

Molecular mimicry as a mechanism for food immune reactivities and autoimmunity